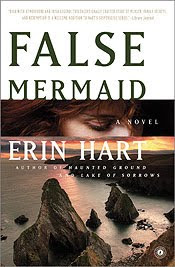 The other day someone asked me what some of my favorite books of 2010 were and I was stumped. Of course it was the end of the day on the last day of our Spring fundraiser. I'm hoping that had something to do with it.

But some books stay in my mind. Years ago I was a judge for the MN Book Awards in the genre fiction. Turns out that basically means mysteries. Though it was a lot of books to read in a short time, it tuned me in to some MN authors I had never read - like William Kent Krueger and Erin Hart. In the years since I read Erin Hart's "Lake of Sorrows" I've actually thought about the main character, Nora Gavin. And wondered if I'd ever get to hear from her again. (Yes, I wonder things about characters in books in my spare time. So sue me!)

So, as luck would have it, and by luck I mean the MN Arts & Cultural Heritage amendment - Erin Hart and her husband (Irish musician) Paddy O'Brien are doing a tour of the Kitchigami library system. For her new book. About Nora Gavin!

This one is called "False Mermaid" and the title is a connection of all the story lines in the book. A quick synopsis:

Nora Gavin remains haunted by a cold case that nearly cost her sanity five years ago: her sister Tríona's brutal murder. After failing to bring the killer to justice, Nora fled to Ireland, throwing herself into her work and taking the first tentative steps in a new relationship with Irish archaeologist Cormac Maguire. She's driven home by unwelcome news: Tríona's husband—and the prime suspect in her murder—is about to remarry. Nora is determined to succeed this time, even if it means confronting unsettling secrets. As she digs ever closer to the truth, the killer zeroes in on Tríona's young daughter, Elizabeth.

For information on the Kitchigami Regional Library tour that begins this Thursday February 24th at the Brainerd Public library at 5pm see here.
Posted by Heidi Holtan at 12:01 PM