People who are passionate about the stories and the topics.... At the beginning of Realgoodwords I do my introductions and I say "Each week we get the chance to talk with authors and writers about the stories and the topics that they are passionate about".

It's almost always the truth. But this week it is REALLY true. And it's a very different kind of show.

Justine Sharrock is one of my guests - her book "Tortured - When Good Soldiers Do Bad Things" has been called:

“An extraordinary book that explores the ugliest underbelly of war. Sharrock takes the discussion of torture and prisoner abuse at Abu Ghraib and Guantanamo into new territory, delving into the lives of the soldiers on the ground assigned these brutal tasks. Throughout the book, Sharrock maintains a balance between empathy and tough reporting as she examines the anguish and denial of men who participated in what can only be described

as acts of evil but who do not believe themselves to be evil.” Thomas B. Edsall, Political Editor, Huffington Post

I also talk to bestselling historical novelist Brenda Rickman Vantrease about her latest "The Heretic's Wife".

"Cardinals and bishops, servants and merchants, ship captains and noble-born ladies and lords: it's a marvel of authorial engineering that Vantrease can keep so many characters separate while she is at the same time weaving together their stories into such a comprehensive and complex whole. There's an elegance to Vantrease's writing, a sense of great respect for the history she explores, coupled with a determined, truth-seeking creativity. In The Heretic's Wife, she renders for her readers a world as fully realized and alive as it is for the characters--both real and imagined--of whom she writes." --from a review by Lacey Galbraith in Chapter16.org, reprinted in The Nashville Scene.

Posted by Heidi Holtan at 3:08 PM No comments:

I'm excited for tomorrow night - the KAXE book club is getting together at 5:30 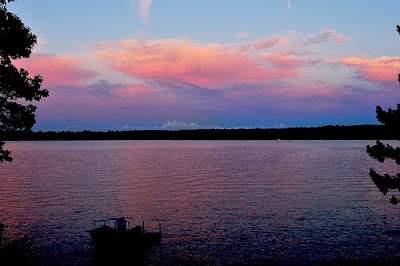 So what's the big deal? There's a couple of big deals about this meeting.

1. Brian Freeman will be AT the book club meeting
2. We're meeting at a book club member's house - near where the action/mystery in "The Burying Place" takes place
3. It's summer in northern Minnesota! Bookclub is meeting outside overlooking Pokegama Lake!! What's not to be excited about?

So how does the KAXE book club work? Good question, and I get asked it a lot. This is the first book club I've ever been in - and we are a no-guilt, everyone-is-invited, all-fun, come-when-you-can-even-if-you-haven't-read-the-book kind of book club.

means YOU are invited. Even if you haven't read the book. And like any good Minnesota get-together, it's a potluck, so we are asking that you bring something to share. Here's a sneak peek at the food/beverages on board for the party: buster bars, beer, sandwiches, thai fried rice, wine, brownies, potato salad and who knows what else!!!

We'll eat, hear from the author, ask questions of the author and enjoy each others company.

Remember when you were a kid? When anything was possible? 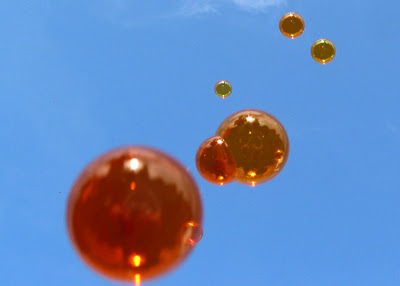 You can hear Minnesota author Tim Kehoe talk about his book "The Unusual Mind of Vincent Shadow" - a book for kids that reminds adults that's it's not only okay to be creative and follow something that might seem crazy, it's part of what makes our lives good, and unpredictable.

Listen here as I talk to Tim Kehoe, a toy inventor that lucky for us, never grew up himself. He tells us about some of his own inventions like colored bubbles or Zubbles - and about his character, Vincent Shadow, who also is an inventor.

Have you invented anything? Wanted to? What's something that SHOULD be invented, to make your life better or more interesting?
Posted by Heidi Holtan at 10:56 AM No comments:

I'm featuring a summer read I really enjoyed this week on Realgoodwords, "The Truth About Delilah Blue" by Tish Cohen. It's the story of a woman who finds out that her parents have both been lying to her. She believed she was abandoned by her mother but she finds out her father took her away from her life to a new one with a new name in California. Neither parents are perfect but they both love her.

What draws you to a summer read? Or does that term not matter a bit?

Posted by Heidi Holtan at 12:23 PM No comments: 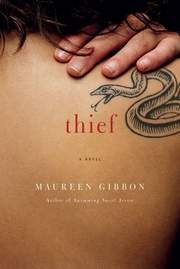 Northern Minnesota author Maureen Gibbon is my guest this week. She's written a compelling new novel called "Thief". It's startling even - mainly because it's a book that doesn't shy away from sexuality.

In "Thief" Suzanne is a teacher in her early thirties who has come up north to get away from her life and problems during her summer vacation. She places a personal ad and one of the people who responds is an inmate from Stillwater State Prison. Most people might turn away, but Suzanne is curious. It turns out the inmate is a convicted rapist - and Suzanne, as a survivor of a rape in her teenage years, wants to find out some things. They begin a friendship that leads to more. Gibbon's writing is raw but not gratuitous. Kirkus Reviews wrote, "In an odd way this book is a female, and highly sexual, version of Thoreau's Walden; there are some lovely bits about solitude, nature and solitude-in-nature, but Suzanne is a woman who craves and needs contact, and much of her contemplation is devoted to exploring the tangled roots of that need. Grim but inspiring, this is a flint-tough, plainspoken novel about a flint-tough, plainspoken woman who asks no pity and gives no quarter."

Gibbon also writes with a very strong sense of place. You feel the northwoods of Minnesota in her writing - especially the lakes. Suzanne, her main character, gets comfort from her daily swims in the lake where she can witness the natural world around and be buoyed by the water. When I talked to Maureen Gibbon, she mentioned a poem by Robert Francis called "The Swimmer".

II
Observe how he negotiates his way

With trust and the least violence, making

The stranger friend, the enemy ally.

The depth that could destroy gently supports him.

With water he defends himself from water.

Danger he leans on, rests in. The drowning sea

Is all he has between himself and drowning.

What lover ever lay more mutually

With his beloved, his always-reaching arms

Stroking in smooth and powerful caresses?

Some drown in love as in dark water, and some

By love are strongly held as the green sea

We'll also talk about a con man this week on Realgoodwords, named John Drewe. Laney Salisbury has written a book that looks at this extraordinary true life character who created one of the most far-reaching and elaborate cons in the history of art forgery. Salisbury talks about how subjective the world of art is - her book is called "Provenance: How a Con Man and a Forger Rewrote the History of Modern Art". Oprah magazine wrote "Specatular... a real-life thriller of the fine art of the con."
Posted by Heidi Holtan at 3:28 PM 17 comments:

A sneak preview of Ayelet & Michael 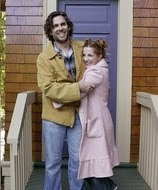 This week I get the chance to check in with the literary super-couple Ayelet Waldman and Michael Chabon. Besides their works of fiction, they both have books of essays out about parenting. Ayelet's is called "Bad Mother: A Chronicle of Maternal Crimes, Minor Calamities, and Occasional Moments of Grace". Michael's is called "Manhood for Amateurs: the Pleasures and Regrets of a Husband, Father and Son".

In searching for a photo of them and more information online, I found some really vitriolic pieces about the two of them - and especially about Ayelet. But I'm here to say that I had a wonderful time talking with them... and found them very down to earth. I didn't get a sense of them being the "new overshare-y parents" as one blog called them. Really? Overshare-y is a word? It seems to me that being honest and frank about some of the hardest jobs out there (parenting) is always welcome.

Here's a sneak peek of my conversation with them.

I asked Michael & Ayelet to describe each other as spouses.

Michael: Ayelet is an amazing mother. She is an extremely fierce advocate on behalf of her children. She spends what I as a father and as a man would probably consider an inordinate amount of time worrying and fretting over the food that they eat and the clothes that they wear and the toxic chemicals that they are being exposed to... and when the alert comes through the preschool that some manufacturer brand of lunch boxes in Scarsdale, NY was defected to have a certain amount of lead in the plastic my reaction to that would probably be like "oh that's too bad for the people in Scarsdale".... And Ayelet's reaction and I think the proper reaction - was to get our kids lunch boxes tested because they might have the same thing...

Ayelet: AND THEY DID!

Michael: (laughter) Exactly! And the kits got ordered and sure enough one of them shows a positive result and that attention - that level of attention that it requires - to successfully raise children is something that I always look to Ayelet as my role model for that. And you know, she's warm and encouraging and all those things as well....

Ayelet: And he says that even though I've been SO crabby for the last couple of days! Thank you honey!

Michael: (laughter) Well, yeah, I'm not talking about the last couple of days. I need to stipulate...

I asked Ayelet to describe Michael as a father.

Ayelet: Well you know, I could wax rhapsodic...

Michael: You don't need to! you've already done it so many times!

Ayelet: But I think the best way to describe it is that I think that he is a really awesome mother.

Tune in this week to Realgoodwords to hear more of the conversation - and check out what the New York Times had to say about them.
Posted by Heidi Holtan at 9:14 AM 1 comment: