Have you read any of them?

April 18, 2010, – The Friends of the Saint Paul Public Library is pleased to announce the winners of the 22nd annual Minnesota Book Awards, presented by RBC Wealth Management. In addition to winners in eight categories, the Book Awards presented the Readers’ Choice Award, which was selected by over 2,ooo voters from across . The annual Minnesota Book Awards program is a project of The Friends, in consortium with the Saint Paul Public Library and the City of .

Nearly 750 people attended a gala award ceremony on Saturday, April 17, hosted by Marianne Combs of Minnesota Public Radio. Announced at the gala, the winners of the 2010 Minnesota Book Awards are:

This imaginative book describes the changing colors of the seasons with beautiful poems and vivid illustrations. Color becomes more than just what you see; it becomes something that you can hear and smell – something that has its own thoughts, feelings, and actions. Joyce Sidman is the author of several books of poetry including Songs of the Water Boatman and Other Pond Poems which won the Caldecott Honor.

I Go to America traces the story of writer Mina Anderson, who emigrated from to and then to the Twin Cities where she worked as a domestic servant. It explores her move to rural where she and her husband worked a farm, raised seven children, and contributed widely to rural Swedish community life through her poetry, fiction, and letters to Swedish American newspapers. Joy K. Lintelman is a professor of history at in .

In 1933, Frank “Jelly” Nash was suspected of masterminding a daring robbery of gold bars, and left the treasure somewhere in . Two graduate students and two thugs are in competition to find the legendary stash of gold. Rushmore McKenzie, a retired policeman, gets involved in the search for the treasure – and also a killer – when the hunt turns deadly. David Housewright has won both an Edgar and a Minnesota Book Award for his crime fiction.

Award for Memoir & Creative Nonfiction:
Kent Nerburn – The Wolf at Twilight: An Indian Elder’s Journey through a Land of Ghosts and Shadows – published by New World Library

Suspenseful, touching, humorous, tragic, and powerful are just a few of the words that could be used to describe Kent Nerburn’s captivating story of his journey to help an elderly Native American man discover what happened to his long lost sister. Nerburn brings light to the complicated friendship between a white American and a Lakota Indian, and the reader is allowed a private and extraordinary glimpse into the life and wisdom of a tribal elder. Kent Nerburn has written a dozen books on spirituality and Native themes, including Chief Joseph and the Flight of the Nez Perce which was featured on the History Channel.

The author recounts the amazing story of Goliath’s Cave in southeastern , discovered by recreational cavers in the 1980s. With a mix of adventure, suspense, politics, science, discovery and wonder, Opening Goliath takes readers to a subterranean wilderness where exploration and preservation sometimes coexist – and sometimes collide. Cary J. Griffith is a freelance writer who specializes in writing about the outdoors.

This sweeping and astonishing novel tells the story of Lilith, a slave on a Jamaican sugar plantation who possesses a dark power. A group of slaves who call themselves the “Night Women” are plotting a revolt and assume Lilith’s powers will be the key to success. However, as Lilith begins to assume her identity, she chooses a different path which poses a threat to the conspiracy. Marlon James teaches literature and creative writing at . The Book of Night Women was also a finalist for the National Book Critics Circle Award for fiction.

Award for Poetry:
Jude Nutter – I Wish I Had a Heart Like Yours, Walt Whitman – published by

In this collection, the poet invokes, invites and revises Walt Whitman’s civil war poems through contemporary and female perspectives. The poems bridge the gap between past and present, loss and reclamation through passionate lyrics full of clarity, imagination and sureness of vision. Jude has received many national and international awards, including a Minnesota Book Award in 2007 for The Curator of Silence.

Peter Augustus Duchene is a ten year old orphan who is training to be a soldier in the city of . He was told his parents and sister are dead, but after a visit to a fortuneteller, he discovers his sister is alive. The fortuneteller tells Peter an elephant will lead him to her, which seems a bit silly and improbable at first; however, when an elephant magically appears, Peter vows to take the elephant and find his sister. Kate DiCamillo won the Newbery Medal for her book The Tale of Despereaux.

This captivating and richly illustrated collection consists of stories and photographs of the Boy Scouts of America’s first century in central and western . From the start of the Boy Scout Movement in 1910 to the Scouts’ contributions to the nation’s war effort in the 1940s, to the growth of Scouting in the 2000s to serve 100,000 young people each year, this book covers everything. Dave Kenney is a freelance writer specializing in history.

At the Book Awards gala on April 17, Carolyn Holbrook received the previously announced Kay Sexton Award, for her lifelong contributions to ’s literary community. Since the early 1980s, Holbrook’s vision has been to promote the inclusion of disparate voices in the global community. She remains committed to writers, readers and spoken word artists - reaching out to individuals and communities whose access to opportunities for exploration of writing is limited or nonexistent. Holbrook’s work connects arts organizations, schools, individual artists, and neighborhoods. The Award is sponsored by Common Good Books.

Also presented was the third annual Book Artist Award, co-sponsored by for Book Arts (MCBA). The award, presented to Wilber H. Schilling, recognizes a book artist for excellence throughout a body of work, as well as significant contributions to ’s book arts community. Schilling’s work is currently being shown at ’s Central Library, , through the end of April and will be exhibited in early May at Minneapolis Central Library.

Books written by a Minnesotan and first published in 2009 were eligible for the 22nd annual Minnesota Book Awards. 250 books were nominated for awards this year, and 32 books were selected as finalists. The winners were chosen by panels of judges from the list of finalists. Nominations for next year’s Awards will open in early fall, 2010. For more information on the Book Awards process, and a complete list of finalists and winners since 1988, visit The Friends website, www.thefriends.org, and click on the Minnesota Book Awards icon.

The Book Awards gala will be broadcast on Saint Paul Neighborhood Network and TPT-MN Channel at a later date. Check your local listings for the channel, date and time of broadcast.

Hugh Ambrose this week and "The Pacific" Are you a war geek?

Me neither. But my husband is...AND he happens to be a volunteer at KAXE. So when the chance to interview Hugh Ambrose, son of the late historian Stephen Ambrose, came up, well, let's just say somebody got an early anniversary present.

I'm so glad Tom did this interview. He knew just what to ask. It makes me realize the value of a multitude of voices... KAXE brings you this day after day, show after show. Whether it's the voices of National Public Radio, Click and Clack, The Morning Show or our talented talented on-air volunteers, there is really nothing quite like KAXE!

Tune in to this week's show - Wednesdays from 6-7pm and Sundays from 9-10am - where we also feature regional poets Steve Downing and Louis Jenkins as well as novelist Duane Schwartz. Louis and Steve are reading poetry tonight at Itasca Community College starting at 7pm and Duane is at the Village Bookstore Saturday April 24th from 12-2pm.

If you missed it, check out the RGW archive!
Posted by Heidi Holtan at 3:41 PM 1 comment: 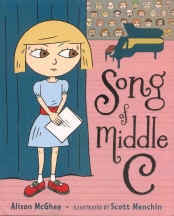 Kate DiCamillo and Alison McGhee are writers from Minneapolis/St. Paul that are known nationwide. Kate for her books and movies like "Because of Winn-Dixie" and "The Tale of Despereaux" and Alison is a Pulitzer Prize nominee and a #1 New York Times bestselling author. Both of them are nominated for the MN Book Awards happening this weekend in St. Paul.

Even though both of these authors write for kids, I love reading their books and talking with them. They both seem almost magical to me, and I know that sounds silly, but here's what I mean.

*When I talked with Kate she is so quick to point out, even with all her success, that she knows she's lucky she get to do what she gets to do (write books and talk to readers!). She readily admits how HARD it is for her to write, but lucky for me and for her readers, she still abides by her own rule of writing 2 pages everyday. Not at least 2 pages, but 2 pages only! Telling me that makes me think anything is possible.

*When I talked to Alison McGhee about her latest picture book "Song of Middle C" that is about a little girl about to perform at her piano recital, she reminded me that we occasionally need to do things in our lives (adults I'm talking to you!) that we aren't good at. Things we can't POSSIBLY ever be that good at. Like taking up the piano. How liberating, to not expect perfection but only practice.

Hope you get a chance to hear the program this week - Wednesdays from 6-7pm and Sunday mornings from 9-10. You can check the archive later in the week as well....
Posted by Heidi Holtan at 1:28 PM 2 comments: