This week on Realgoodwords!
Posted by Heidi Holtan at 9:10 AM No comments:

This week on Realgoodwords: River Jordan and "Praying for Strangers" and Juliette Fay's "Deep Down True"... about a woman facing huge change in her life, change that can sometimes send her reeling back to the feeling of middle school.

Posted by Heidi Holtan at 5:01 PM No comments:

reading on planes, trains and busses 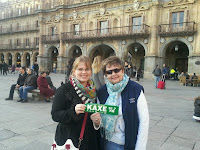 I recently got back from a marvelous trip to Spain. It was a quick trip that involved a lot of different modes of transportation - and for this reason, the books I chose to bring were not chosen lightly. What books to bring on a trip (even if it's just to Duluth) is never an easy or quick endeavor. For the European trip I had a couple of requirements: they had to be books I would be featuring on Realgoodwords in the future and they had to be compelling and keep me entertained. I've learned over the years that I can't choose books I SHOULD be reading or I think will look cool to others. Believe me, this doesn't work and makes you consider buying duty-free, which no one actually needs.

My first choices to bring were Matthew Logelin's "Two Kisses for Maddy - A Memoir of Loss and Love" and River Jordan's "Praying for Strangers - An Adventure of the Human Spirit". Right off the bat, I couldn't take Matthew Logelin's book with me.

I couldn't put it down as soon as I picked it up and finished it before the trip even began. Therein was my n 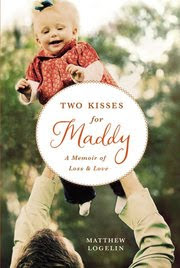 ext problem. What would the OTHER book be that I brought on my trip?

But first, let me tell you about "Two Kisses for Maddy" and why I couldn't put it down. It's a terrible story. Terrible because it's Matthew Logelin's real life story of losing his wife, right after his daughter was born. But the book and Matthew's writing is compelling. It's raw and it's real and I didn't want to stop reading it. And there's joy as well as sorrow in his story and it really gives you hope that even if you face the suckiest of suck predicaments, there's a sliver of hope out there. I promise you, you won't be able to put this one down.

So I'm back to my book quandry: I've got "Praying for Strangers" and what else to bring? I decide on a novel, Jael McHenry's "The Kitchen Daughter".

I read "The Kitchen Daughter" on the flight to New York and then from New York to Madrid. It didn't disappoint. We're in the age of celebrity chefs and cooking reality shows and though I'm interested in those things, sometimes novels with food as a focus feel a little like they are jumping on the bandwagon. Not "The Kitchen Daughter". In Jael McHenry's assured prose, she tells the story of a main character unlike one I've read before. Ginny Selvaggio is a wo 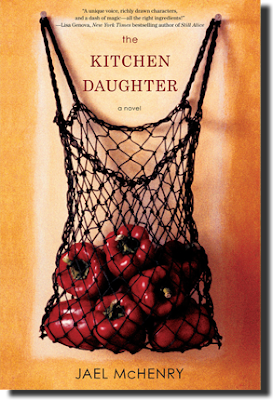 man in her twenties who has always lived with her parents. She's not easy to get close to - and that's because she's got undiagnosed Asperger's syndrome, and thanks to her mother and father, has had a happy, but sheltered, life. When her parents are killed in a car accident, Ginny's coping skills are pushed to the max. Food was always center to her life, but she comes to find solace in cooking recipes of relatives...and odd things begin to happen when the food is being cooked. It's an interesting book: a bit magical realism and a lot of strong characters.

In the middle of my trip, while we relaxed and enjoyed the small town of Salamanca, Spain, I began reading River Jordan's "Praying for Strangers - An Adventure of the Human Spirit." It was one of those books that was exactly the right book at the right time. It's River's story: having both her son's shipped oversees with the military (to Afghanistan and Iraq) she found herself making a resolution that she didn't really even understand. To pull herself out of her own situation - she decided to each day, choose a stranger and pray for them.

In Praying for Strangers, River Jordan tells of her amazing personal journey of uncovering the needs of the human heart as she prayed her way through the year for people she had never met before. The discovery that Jordan made along the journey was not simply that her prayers touched the lives of these strangers (in often astounding ways), but that the unexpected connections she made with other people would be a profound experience that would change her own life forever.

In a foreign country where I didn't speak the language, I found myself looking at people differently. Think 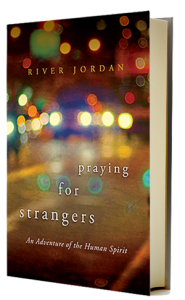 ing about what their lives might be. And I started realizing how easy it was for me to be thinking of myself, all of the time. How did I look? What did other people think of me? And most of the time I barely paid attention to the people I was coming into contact with. Reading River's stories of all the people she met - the connections that were made - made me sit up and pay attention. I also liked that River's book wasn't prosletyzing a certain religion. She had no intention of making people believe what she believed. That wasn't the point.

Stay tuned for my conversations with all my book and travel companions in the upcoming weeks - Matthew Logelin, Jael McHenry and River Jordan. Realgoodwords can be heard on 91.7KAXE Wednesdays at 6pm and Sundays at 9am. If you miss it, check out the archive here.
Posted by Heidi Holtan at 9:10 AM 1 comment: